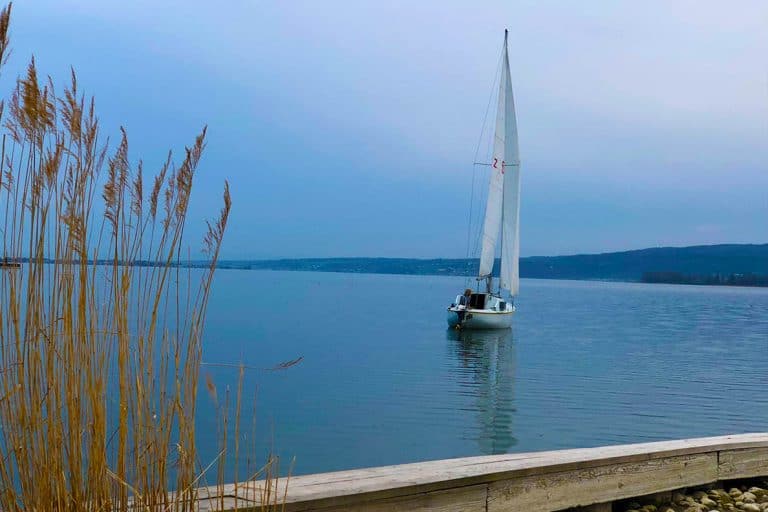 After our visit to the Rhine Falls in Switzerland, we headed back into Germany and found a Stellplatz on the shore of Lake Constance. We thought it was a wild camping spot- but it turned out to be a fully serviced stopover, complete with electric.

17€/night and you can stay for up to 3 nights. It was only about a third full, and was very quiet. It was next to a road, but we didn't hear it at all. There was a small restaurant a short walk away, and a lovely walk along the Lake. There wasn't much of a view, unfortunately, but it was a great stopover.

The next morning was a gorgeous day. We'd had a few cloudy ones, although it felt fairly warm for April, but today was bright beautiful sunshine. The light glistened off the waters of the lake and it was just beautiful. We saw this yacht slipping away to enjoy a day's sailing- so pretty in the early morning light. We set off and were pleased to find the main road ran right along the shore of the lake, so you had beautiful views nearly all the time. There is a train line between the road and the lake for most of the time, so there isn't much parking on the shore itself. And as we discovered, most of the small roads which led to the shore went under the train line, and had VERY low bridges.

One of the reasons I chose this route on our German motorhome trip was to drive through Überlingen, on the shore of Lake Constance. I thought Überlingen was a small town, but it turns out it's an actual city, with famous Roman ruins and healing Spa waters. As an Air Traffic Controller, part of our training included learning from past air accidents, and the one which happened over Überlingen was horrific.

For those who don't know, in 2002 two planes collided in mid-air above Überlingen, killing everyone onboard. One plane was a DHL cargo flight, with the pilot & co-pilot; the other was carrying 69 passengers, including a load of children on a school trip. Due to a combination of errors, including the air traffic system & the way the pilots handled the warning messages in the cockpit, the two planes ended up at the same point at the same time. The odds of that happening in that airspace at that time (it was in the middle of the night & the airspace was quiet) are astronomically small, but it happened. The poor air traffic controller, who was already living with that guilt, was stabbed to death on his doorstep in 2004 by a distraught father who had lost his wife & two children in the crash. The whole thing is heartbreaking.

The only slightly positive thing, if there ever can be from something so horrible, is that many improvements were made to both air traffic & the pilots training as a result, making the skies much safer. This is the reason they still use the accident as part of ATC training today- as well as scaring the life out of us all! And it was for this reason I really wanted to visit and pay my respects.

Unfortunately, Überlingen is not designed for motorhomes. At ALL. It's one of the few places we've visited in Germany which isn't motorhome friendly. There are low bridges on nearly every road, the other roads are narrow and lead away from the city, and to top it all off the memorial is badly signposted if you're driving. We did find a campsite on the edge of the city, but there were so many motorhomes packed in, we didn't bother to stop. I'm not sure there would have been room for us & the trailer anyway- they were that tightly packed together!

So, after all that, we didn't get to see anything at all, which was a shame. I would love to go back someday as it really did look like a pretty place to explore- if we can find somewhere to leave the van!

Lake Constance looked like a great place to play with the drone. It's not the easiest place to set up shots, as it's a fairly busy area and there's also a train line which runs down the shore of the Lake, so we needed to go right up into the hills in order to safely use the drone away from people. Goodness knows what the residents of the small hamlets thought when they saw our massive white motorhome clambering up the hill towards them, towing a trailer. Probably English idiots. 🙂 But we're quite pleased with our pictures of the Lake- well worth the effort.

On the map you'll find a pin where we stopped for lunch. This is just a little layby off the main road, but as you can see the views are INCREDIBLE. You could park here overnight too if you wanted, but there are a lot of trucks which come past and they did shake the van. We enjoyed some fresh bread and had a picnic on the wall. You can also see the mountains in the distance- those are the Alps.

At the bottom (Eastern) end of the Lake, it suddenly becomes Austria. The main road actually avoids the border, so you can stay on that quite happily, but we'd never been to Austria and wanted to put the sticker on our van map, so we decided to detour. We literally drove about 4 miles over the border, then found a route back into Germany. Even in those 8 miles or so, we fell in love. The roads were amazing! (We drove the corner of the L9 if you're interested.) Proper biking roads, perhaps even better than the Black Forest!! And the scenery was beautiful. We very nearly decided to stay there and visit beautiful Bregenz but we're now on Day 11- the end of the holiday is looming, and we want to get to Neuschwanstein & Zugspitze. So we didn't detour. But it's gone straight up our list for us to enjoy next summer. And when we come back, we're definitely going to check out Lake Konigsee, which is a little bit further East but is apparently one of the most beautiful lakes in the world!

Back in Germany, we headed straight for Füssen, which is the nearest town to Neuschwanstein Castle. This town is beautiful- such bright colours and incredible decorations. One of the biggest drawbacks to us cramming so much into two weeks is not having the time to really explore a place. I felt like we only scratched the surface of Füssen- which was a good thing for our bank balance as that place is expensive! And very, very busy with tourists. Seriously, if you like quiet and peaceful places, it's not for you. In 2017 alone, Neuschwanstein Castle got over 1.5 MILLION visitors. That's crazy- and Füssen has to handle most of them.

We really wanted to find a wild camping spot for the night. There were a couple listed on park4night, but when we arrived there were signs saying no overnight parking. We never like staying in these, as we don't sleep well for fear of being moved on, so we didn't stop. Unfortunately, that only left us with a campsite. There are three campsites around the area, so we headed to one nearest Schwangau. It was half empty, the only other visitors were long-term residents with annual pitches… and it cost 38€ for the night. We laughed at the fact that that seemed sooooo expensive to us- 38€ for a hotel for the three of us would be really good, but in the van it just seems like daylight robbery.

We did find out later that there is an alternative motorhome parking area just outside the campsite (turn RIGHT instead of left), which is cheaper- around 20€/night, so if we ever return we'll try that. I can imagine it gets CRAZY in summer though, so you might want to consider prebooking as there really aren't many options in the area for motorhomes or caravans.

On the plus side, the campsite had a small shop which got fresh bread every morning, so we were able to order some croissants and a crusty baguette. There is also a restaurant open in the summer.

But the biggest plus side is that we managed to get a spot far away from everyone else, just in the back corner… which just happened to have a direct line of sight to Neuschwanstein Castle and the mountains around it. So we were able to get this…

Food/Fuel/ Tolls- it’s on the card- I’ll do a total for the trip when we know the figures.

As always, if you've been to Lake Constance or Füssen, let me know in the comments below. I'd love to hear your experience. And if you're planning to go, why not add this pin to a planning board on Pinterest. 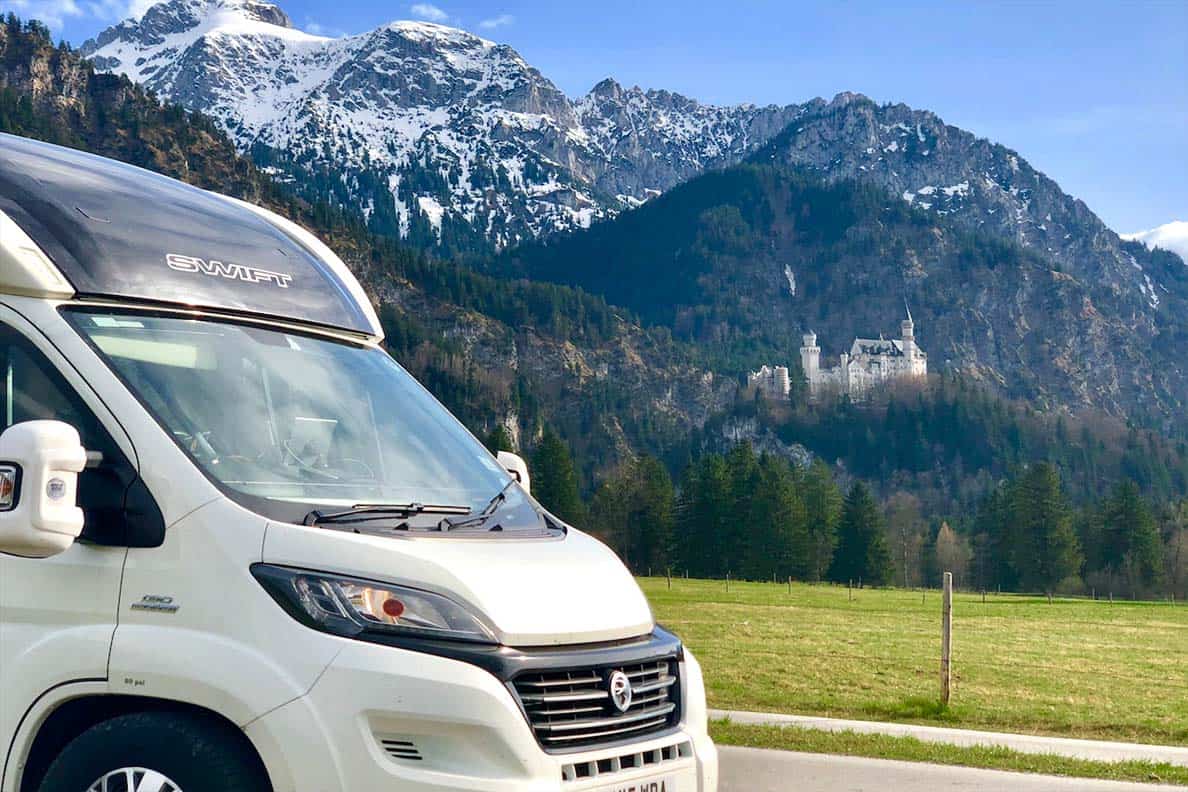 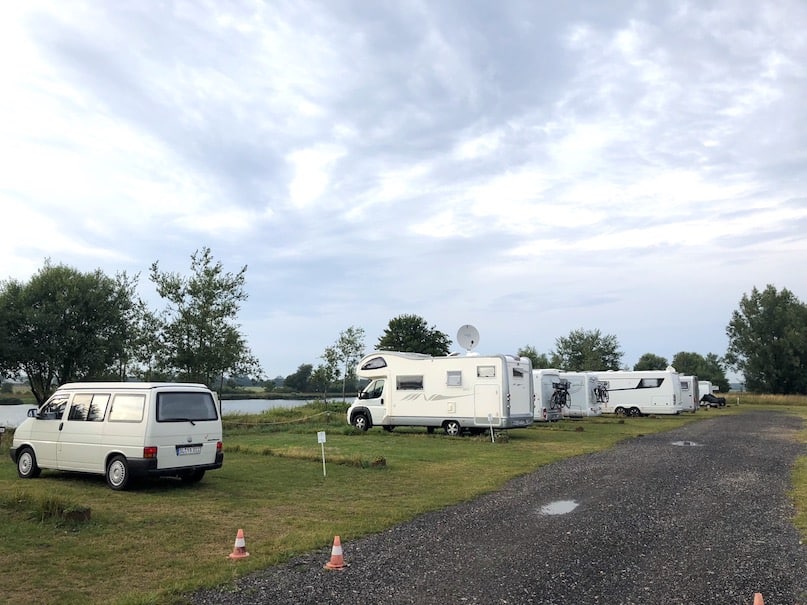 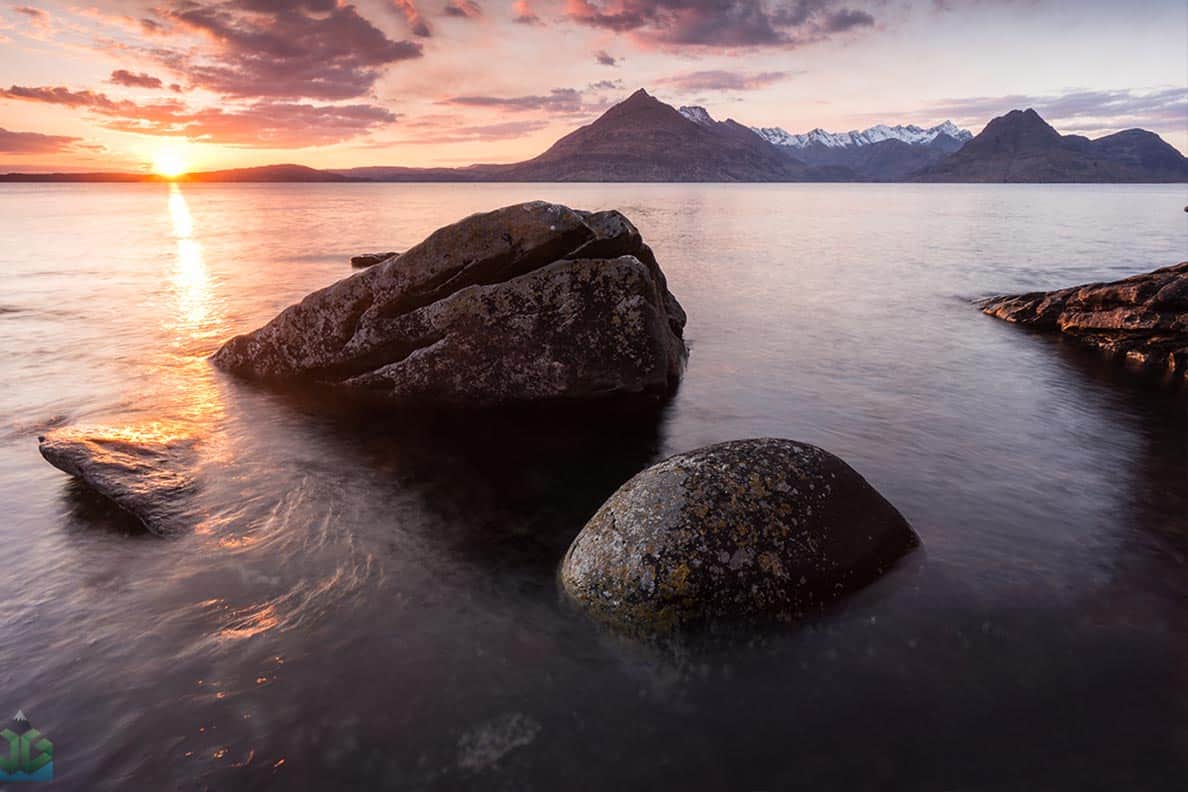 See awesome places we visit, get bonus motorhoming tips and come chat with us on your favourite hangout:
60 shares