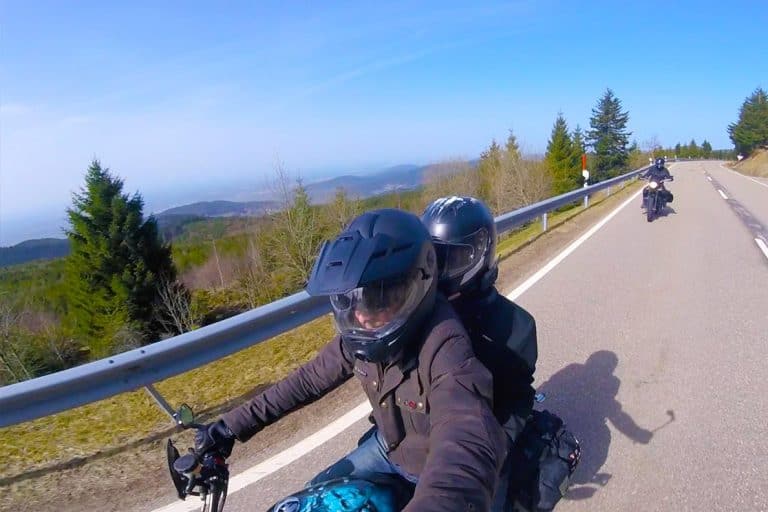 The B500- Time to find out if this is really the best biker road in the Black Forest!

One of the reasons we wanted to visit the Black Forest was to ride the famous biking road- the B500. This road has become legendary amongst bikers as one of the best roads on the planet- so, naturally, we wanted to check it out for ourselves, which is why we've spent the past week lugging our bikes around behind the motorhome.

I know many of you reading this aren't bikers, but even if you're motorhoming in Germany it's a fun area to explore and the views are spectacular- definitely worth a visit if you're in the area- just prepare for a LOT of bikers whizzing past you!

The Best Biker Road in the Black Forest- location

It's easy to find the route of the B500. The (mostly single-laned) road runs roughly North to South through the Southern Black Forest and the best part is generally considered to be from the Spa Town of Baden-Baden down to the town Freudenstadt. However, I spent ages Googling which other roads were good for motorbiking in the area. Surely there couldn't be only one, but finding names for other good roads was pretty difficult- guess we'll just have to wing it.

We set out from Lahr, where we'd stopped for a couple of days, and headed East. We decided not to stick to the main roads but to go cross country as much as possible- not easy with a sat nav which doesn't understand bikers! It kept trying to send us in completely the wrong direction, so a lot of the day was spent making up our own routes through tiny minor roads. This was actually a good thing, as purely by fluke we found the L92, also known as biker heaven.

The Best Biker Roads in the Black Forest- consider minor roads too.

Let's be clear- most of the ‘A' roads in Germany, which are generally the ones with 3 digits, such as the B500 (and the road to the cuckoo clocks of Triberg), are a lot of fun to ride. German roads are smooth, wide and seem to have much better visibility than British roads. On top of this, most German drivers seem to be taught how to deal with bikers- they leave space, don't ride on your back wheel and there seems to be a healthy respect between all road users. (NOTE: This is a gross generalisation. Of course there are decent and sensible UK drivers, and there are DEFINITELY some boy racing BMW drivers in Germany, but both of us felt much happier on a bike at (perfectly safe & sensible) speed in Germany than we do in the UK. Just our opinion.)

Anyway, back to the roads.

The L92 started gently, with some sweeping bends anda climb up into thick forest. It sucked you in gently, which was good as I hadn't ridden a motorbike on a road like this for a while and was trying to remember how to corner on the wrong side of the road. (Top Tip: when you're turning to the left, don't go too far into the centre… there are cars coming the other way!) The turns started to get tighter and closer together and soon we were winding higher up into the mountains. Yes, there is still snow around in April- but not on the roads, which were beautifully clear, even on the smaller roads.

We stopped in a layby in the forest to take some pictures of our bikes, never guessing what was just around the corner.

Once we'd finished posing and set off again, we rode perhaps half a mile and came out of the top of the forest. Suddenly, we were surrounded by the most INCREDIBLE views. Seriously- we had to force ourselves to focus on the road (and ignore the sheer drop on one side- not easy!)

Near the top, we found a little gravel layby, which was FILLED with bikers. I generally hate places like this because a)- gravel and b)- I have to reverse my bike in to park… and I'm pretty rubbish at that. But the chance of photos with that view was too good an opportunity to miss, so we stopped for a while and enjoyed both the views and the sunshine. Within 5 minutes, Jade fell asleep- no shock there. 🙂 That girl can sleep anywhere!

Mr WB wanted some photos of him on his bike, so we rode over the top of the mountain (where there was a nice looking cafe) and started our descent the other side. Turns out, downhill on roads like this is MUCH harder than uphill. Much. Trying to control the bike, and the speed and the turns, all whilst gravity is tugging at you down an increasingly steep slope, was an education. I've only really been riding for just over a year… looks like there's still a lot to learn!!

We stopped at a 180 degree bend, and Jade and I positioned ourselves with our cameras whilst Mr WB rode up and down that section of road a few times. I tell you what, his exhausts sounded amazing. I may be biased, but they were the best thing we heard that day.

The Best Biker Road in the Black Forest- the B500.

And finally, finally, we descended the L92 and joined the B500. Immediately the road flattened out, became wider, smoother and faster! I think I expected it to be twisty and turny, but it wasn't. This road is easy, fast and SO MUCH FUN!

We bombed our way towards Baden-Baden, saluting every biker we saw- and there were a LOT. This really is biker heaven, especially when the sun is warm and you can smell spring in the air. We'd had a big conversation before we left the UK on whether we needed to bring two lots of bike gear with us; our heavy winter gear and our lighter summer stuff. Luckily we had, and luckily I'd worn my lighter women's bike clothing today, as the temperature cranked up to over 20 degrees! Even riding with the breeze that was deliciously warm.

We stopped at a cafe for lunch- which was hilarious as there was no menu and we didn't know what they had! By chance, we saw someone else eating Bratwurst, so we ordered three of them and a creamy cake which was by the counter. It was only when the lady cut into it that we discovered the cake was bright pink with green bits in which Jade was convinced was celery… but it was actually rhubarb, so Mr WB happily devoured that all by himself. 🙂

The Best Biker Road in the Black Forest – Baden-Baden

About 30 minutes later, we arrived in Baden-Baden, which is a posh spa town where wealthy Germans spend their summers. The town is on Roman maps as the spring there was considered a good bathing spot. Baden derives from ‘bathe' or ‘bath' (similar to our city of Bath), but there are many towns with hot springs which use Baden- so Baden-Baden doubled it up to differentiate from the others.

It was the only place on the entire B500 that we didn't feel was entirely welcoming to bikers- although they must deal with a lot of them. The cafes were difficult to access and parking seemed overly complicated. Weirdly, a lot of the bikers seemed to disappear as we entered – perhaps they knew something or somewhere we didn't. We drove around the town and it is indeed very pretty, with beautiful decorations on most of the buildings. We had been planning to stop for a coffee here, but we couldn't find one which was easy to access, so we decided to turn around and head back down the B500 towards home.

There are several castles/ ruins around the area and lots of great hikes into the Black Forest, so I think Mr WB and I are agreed that we'd like to come back and explore it further. I'd also love to visit one of the famous spas one day- just need to pick a non-nudist one!

The B500- is it really the Best Biker Road in the Black Forest?

The answer is possibly- but I haven't ridden them all! 🙂 Why this particular road is so famous is a little confusing, as honestly there isn't much difference between this road and many others around the area- although the views are stunning and it is great fun to ride.

If you want twisty, turny, ‘oh my god am I going to make it round this bend' roads, then pick one of the smaller ‘L' roads through the Black Forest. The B500 isn't technical, which honestly is a plus for a beginner like me, BUT it IS fast & fun. And in our opinion well worth the ride.

Whilst we're on the subject of fun roads, there is also another good one on the road south of Schiltach, the 492, which runs through a gorge and was spectacular to drive through. You're welcome. 🙂

Having spent the day playing on bikes, it's definitely time for some more castles!

Have you ridden the B500 or any other good roads in Germany? Which do you think is the Best Biker Road in the Black Forest? Or have you visited any of the Spas?

Let me know in the comments below (right at the bottom of the page) so we can plan them for our next visit. 🙂

2 thoughts on “Best biker road in the Black Forest?”

See awesome places we visit, get bonus motorhoming tips and come chat with us on your favourite hangout:
0 shares