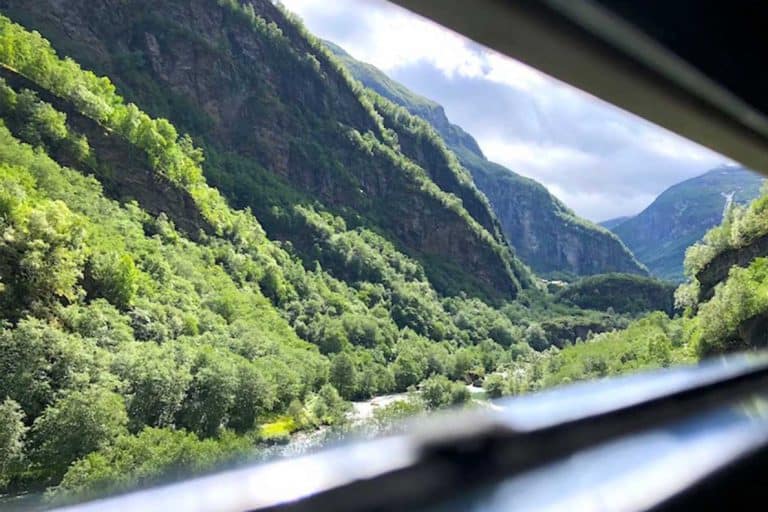 One of the things we were really looking forward to on our motorhome holiday in Norway was riding on the Flamsbana railway, a train ride up into the Norwegian mountains, which in 2014 was voted the most beautiful train ride in the world! Can it live up to the hype? We decided to find out for ourselves.

Firstly, an important point- it’s pronounced FlOm, not FlAm- the little å makes it into an ‘O’ sound- although the Norwegian lady was very polite when she corrected us! 🙂

Watch the video of us riding the Flam Railway- the most beautiful train journey in the world!!

See for yourself the beauty of the Flam railway, the waterfall, and what we REALLY thought about the most beautiful train journey in the world! Don’t forget to follow us on Youtube!

Can you visit the Flamsbana Railway in a Motorhome?

Absolutely! There is a large car park about a 3-minute walk away with loads of parking for motorhomes and cars. We parked a motorhome & trailer without any issue. It’s pretty well signed as you drive in and there’s room to reverse into spaces etc. We arrived in the afternoon after spending the morning at the waterfall you can walk behind and there was plenty of room, which honestly we were surprised at.

You cannot stay overnight at the parking area, but there is a motorhome campsite right next to it, which we considered staying at. The campsite is tiered, so you get a view from pretty much every pitch. However, we went into the campsite and politely asked if we could buy some water as there are very few Motorhome service points along this stretch of road. The man on the desk was incredibly rude- informing us we could only get water if “we paid for the night; whether we chose to stay there or not was up to us” – his words, not mine!

I don’t know how many times they get asked the same question, but it was the first and only rude Norwegian we found. Strangely enough, we decided not to stay- and instead found possibly the BEST campsite in Norway about an hour down the road- well worth the drive!

Book tickets for Flamsbana Railway- How much are tickets?

We didn’t book our tickets in advance as we weren’t sure when we were going to get to the Flåm railway. 30 miles in Norway can take 2 hours depending on the road and the ferries you need to take to get there. With this in mind, we turned up not sure if we would be able to get tickets or not- bearing in mind it’s August, right in the middle of the School Holidays and peak tourist season.

As it happened, we walked into the ticket office and straight up to the desk- no queue at all. There was a train leaving in 5 minutes which we were able to get tickets for- how lucky was that!

I believe children under 4 are free. Dogs are allowed on leads. You can also get a single ticket up, hire mountain bikes at the top and cycle back down, which we saw many people doing. It looked like fun- except the last time I got on a mountain bike I broke my arm…!! You can take your own bicycles on the train and then ride back down if you prefer.

Trains go roughly every 90 minutes and they run exactly on time as they need to leave at the same time the other train leaves from the top. Up to date ticket prices and timetable can be found HERE

Flam railway tickets- what to do next!

Once you have your tickets, proceed to the railway station, where a guard will check them and let you on to the platform. There are two waiting areas if you need to wait for a train- one is a tour area and one is for everyone else. When the train arrives and you are allowed on, pick your seats. As we were late, most seats had already gone and we struggled to find two together. We walked the length of the train- as far as we could. The front end of the train is reserved for tour groups, so you can’t go all the way forward.

We ended up sitting as close to a door as possible and standing in the entrance area for much of the journey, which worked really well as we could move from side to side and take photos through the partly opening window in the door.

Is there really fighting over seats?

There are stories online of fights happening in the train over seats. We didn’t see any of this at all- but we did see a tour group running down the platform. I think they were late and had been told to hurry up, but perhaps they were racing to get the best seats?!?!

Which side is better?

In my opinion, the side with the better views is the side closest to the platform as you enter the train in Flåm. Ideally, you want to sit next to an OPENING window- they don’t all open, but your photos will look a lot better if you don’t take them through glass. Expect people to stand up and lean over you to take photos- it’s all part of the ride!

People do get off at the top, so it is possible to do one side up and the other side down… but people grab seats at the top VERY quickly- so be prepared to move fast.

The train goes from Flåm up to Myrdal and back down again. It rises 865m and the gradient averages 5.5% through 20 tunnels- some of which last a minute or two. It runs pretty much every day of the year – in the snow it looks very pretty but there’s no heating on board so wrap warmly!! The entire journey up and back lasts about 2 hours, with a 15 minute (ish) stop at the top in Myrdal.

Ok, bad news for all tinnitus sufferers (like Mr WB unfortunately)- this train is loud! And the brakes screech at just the wrong pitch to set off the tinnitus. It did get better as we went further up the mountain (which is weird; surely they would use the brakes more???) but the first 5 minutes were pretty tough for him.
It’s crowded, but not unbearably so. There was room to sit and have a sandwich- I would highly recommend taking your own food with you as there are no refreshments onboard. There are toilets, which were incredibly clean, despite it being at the end of the afternoon.

Keep your tickets to hand as the guard does come to inspect them. Also, keep an eye on the screen above and the audio commentary, which is in English. The commentary only plays on the way up and is full of useful information about what you’re seeing and which side of the train to look.

On the way up (and down!) you pass Kjosfossen Waterfall, which is a beautiful waterfall halfway up the mountain. Top tip- the waterfall is on the OPPOSITE side from the Flåm platform, and the train stops for about 5 minutes so everyone can get off and enjoy the waterfall. As the train comes to a stop, head for the door and if you’re really quick, you can get a photo of you and the waterfall without anyone else there!

Kjosfossen is one of the most visited tourist attractions in Norway and falls about 225m (738ft.) This waterfall actually runs a power station which is what powers the Flåm railway.

During the stop, you’ll hear music playing. Look to the right of Kjosfossen waterfall and you’ll see a woman dancing- trying to lure the men into the mountain to their certain doom. It was fun to watch this- certainly different from the other train journeys we’ve enjoyed! Watch the video if you want to hear/ see the crazy woman dancing!!

Is it the most beautiful train journey in the world?

In 2014, Lonely Planet magazine named this train journey the best train journey in the world! It’s certainly pretty, there’s no denying that. But is it the most beautiful train ride in the world? I think it depends entirely on how you’re travelling  around Norway.

If you’re on a cruise or just flying into the country for a few days, we would recommend the trip as you get to see the beauty of the Norwegian mountains and a very impressive waterfall. Having said that, if it’s raining, I wouldn’t bother as you won’t see much.

If you’re travelling by van/ bike/ any other vehicle and have therefore seen many incredible views along the roads, you won’t find the train journey as impressive as advertised. Heck, we think the road to get to Flam had just as many incredible views- and they were free! So for us, it wasn’t worth the £55/ per person fee.

But we did get to see Kjosfossen, which was definitely impressive and we did get to enjoy the scenery from a different viewpoint other than the motorhome, so there are definitely pros and cons to the trip. But again, I wouldn’t bother doing it in the rain- save your money. We had sunshine on the way up and rain on the way down- the difference was startling!

– Show me more posts about Norway

I hope that’s given you a good insight into the Flamsbana railway and our experience of riding it. Have you ever ridden the Flåm railway? Do you want to? Let me know what you think in the comment below.

If you want to save this post for later, here’s the pin: 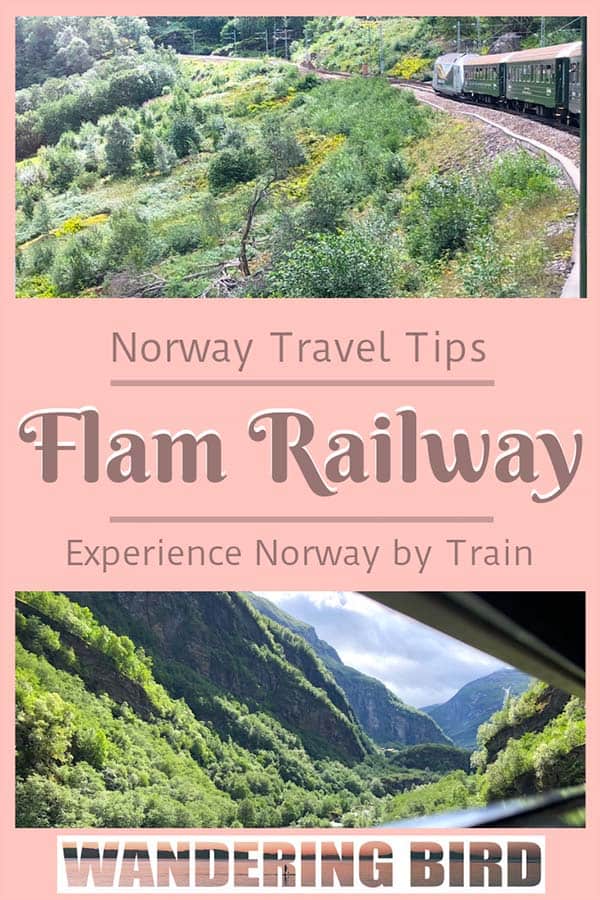 2 thoughts on “Flamsbana Railway- the most beautiful train ride in the world?”

See awesome places we visit, get bonus motorhoming tips and come chat with us on your favourite hangout:
237 shares
error: Content is protected !!