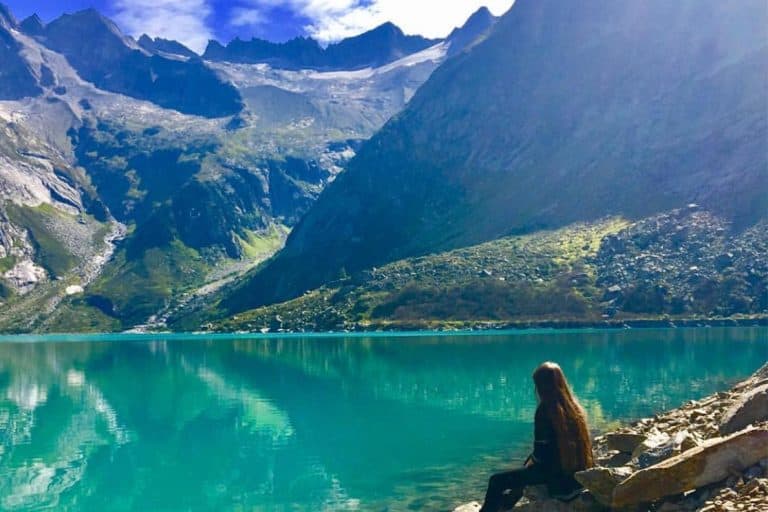 We thought a nice sightseeing trip up a Swiss mountain to visit the pretty reservoir of Gelmersee would be calm, sedate, even a little boring. After all, we’d already climbed Mont Blanc. But this is the Gelmerbahn Funicular. And it’s flipping terrifying!

Gelmersee is a man-made reservoir up a mountain in the Swiss Alps. Yep, that incredible lake with the amazing coloured water is entirely man-made. The Gelmer funicular is how the workers got up the mountain to create the reservoir.

It used to be the steepest funicular in the world, but now that honour goes to the Stoos funicular (also in Switzerland!!) However, the Stoos funicular is enclosed, and I think that would get a bit claustrophobic. Gelmer is completely open-air, which allows for incredible views and videos!

Scroll down to watch the video of us riding the Gelmer Funicular- much to my daughter’s terror!

How to get to the Gelmerbahn Funicular

I found it really difficult to find the Gelmerbahn Funicular on Google maps. To avoid confusion, it’s on Route 6, south of Innerkirchen & Guttannen and north of the Grimsel Pass. It’s about two hours from Lausanne, which is a beautiful place to spend a day.

It’s in on a tiny, tiny village called Handegg- I believe there is a hotel here but not much else. Handegg didn’t come up on my Google search either.

While you’re in the area, there are plenty of other beautiful places to explore, like Grindelwald and Lauterbrunnen, only 90 minutes away.

You can see the exact location on our maps HERE

Parking a motorhome at the Gelmer Funicular

If you are campervanning in Switzerland, there’s plenty of place to park your van or motorhome. You’ll arrive at a small car park halfway down the Handegg gorge. It’s beautiful, peaceful and in no way prepares you for what is to come. There is space for several cars and motorhomes, including long ones like ours. I highly recommend visiting early- it’s quieter and you’re more likely to avoid the coaches which arrive later in the day full of people on tours.

As an aside, it was at Gelmer that we found out Jade’s GCSE results (after struggling for ages to get internet!!) For non-UK readers, these are the exams that enable you to get into college. Having homeschooled Jade for a year, we were all a little nervous!

But it turns out, homeschooling works- or at least it did for us. She got awesome results and is now safely in college. You can see her reaction (and the results) in the video below.

Tickets for the Gelmersee Funicular

Tickets can be purchased online (http://www.grimselwelt.ch/en/transport-lift/gelmer)  or on the day from the ticket office on site. Each trip is time allocated and can only take 24 people at once.

We visited during the August school holidays and just turned up without booking- but we did arrive at 9am and managed to get in before 2 massive coachloads of people arrived. It might be worth booking!

In 2017 a return trip cost CHF 32 per adult and CHF 16 child (6-16). I assume children under this are free but they would still need a seat. I’m not sure very young children or babies are allowed as there is a risk of falling- please check in advance.

You have to report for your trip on the Funicular 15 minutes before the time on your ticket. If you are late, your seats will be sold- this happened to several people whilst we were waiting and they were VERY strict about this. Tickets are non-exchangeable and non-refundable. It’s Switzerland- they expect you to be on time.

Right next to the Gelmer Funicular is one of our favourite fun free swiss activities for the budget traveller– the suspension bridge between the Handeck Hotel and the funicular.

This bridge is entirely FREE to go onto, take some photos and enjoy the incredible views over the mountains. It’s probably not for you if you’re scared of heights, but both Jade and Mr WB managed to walk across… as long as they didn’t look down (or some annoying person *cough* didn’t bounce up and down. #sorry!)

Watch the video of us on the Gelmer Funicular

Want to see us riding on the Gelmberbahn (which involves Jade being quite scared!!) and on the suspension bridge. The views are simply breathtaking!!

Once the car arrives you need to wait for anyone descending to get out. Then, it’s your turn to get in. There is a little bar which is locked over your laps- like on a rollercoaster- but the car has no sides. As long as it’s not raining, I’d suggest sitting in the front-middle if possible. This way your view isn’t obscured by the roof. If you are one of those crazy people who love roller coasters, try & sit in the very front but there’s often a queue for this.

And with a lurch, you’re off; going backwards up the mountain. I still can’t decide which was scarier- going backwards and having no idea what was coming, or going forwards where you could see the drops! Jade was pretty terrified both ways. Mr WB went very quiet and honestly, there were moments where I was a little uncertain too- and I like heights!

It’s not a rollercoaster- there are no sudden loops or drops, but you do tilt backwards and you can feel the steepness of the gradient. The car moves at a pretty steady pace- there are a few jolts and lurches along the way and it slows down a lot for the really steep bits.

The journey one way takes about 10 minutes and the steepest gradient is 106%!! It’s about 1000m track length and takes you nearly 1,500m up a mountain. There are no passing places, so it’s just one car which goes up and down and it only operates from around end of May to end of October, but do please check the website to ensure this.

How fast does the Gelmer Funicular go?

The funicular travels at 2m/ second (6.6ft/ second)… which is surprisingly fast! For some reason I thought it would be fairly slow and sedate, but nope. (Word of caution- many youtube videos have been sped up (including mine in parts) because the ride is pretty long and we want to show everyone the stunning views. Some videos make it look like a roller coaster- it’s not like that. Seriously- it’s quite scary enough without it going any faster, thanks very much! 🙂

Once up, you’ll discover Gelmersee lake. The whole reason for the funicular was to transport workers up to this area so they could build the lake, which is actually a reservoir and part of a hydroelectric power station! Who would have believed that this whole thing would be man-made??!!

Gelmersee lake is beautiful and well worth bringing a picnic up to enjoy. There is no shop or cafe up here- you’re literally up a mountain, so we were grateful we’d remembered warm jumpers and a bottle of water.

Many people choose to either walk back down the mountain, which is considered one of the best hikes in Switzerland. The station at the bottom has maps to help guide you down or you can choose to walk around the lake. We chose to do neither as we only had 30 minutes at the top, so we sat quietly and for most of the time we were the only people around. It was absolutely magical and one of my favourite places on the entire holiday.

The trip down had a lot fewer people in the car- probably because it was still morning and most people hadn’t finished their hikes yet. This allowed us to sit in the second row and film the descent. As I said before, it was still pretty crazy but the view of the mountains as we descended was incredible! I can completely understand why Switzerland is on the Ultimate Europe Bucket List!!

The most scared we’ve ever been in a motorhome!

Little did we know that just after this video, we would have one of the scariest parts of our trip- hurtling down a mountain in our motorhome without any brakes! It’s the most scared I’ve ever been travelling in a motorhome– I hope we never repeat that experience.

Despite that, we LOVED our visit to Gelmersee and the Gelmerbahn funicular. I highly recommend adding it to your Switzerland itinerary if you’re lucky enough to be visiting.

Have you been to Gelmersee? Would you like to? Did you scare yourself silly on the mountain on the way down?? 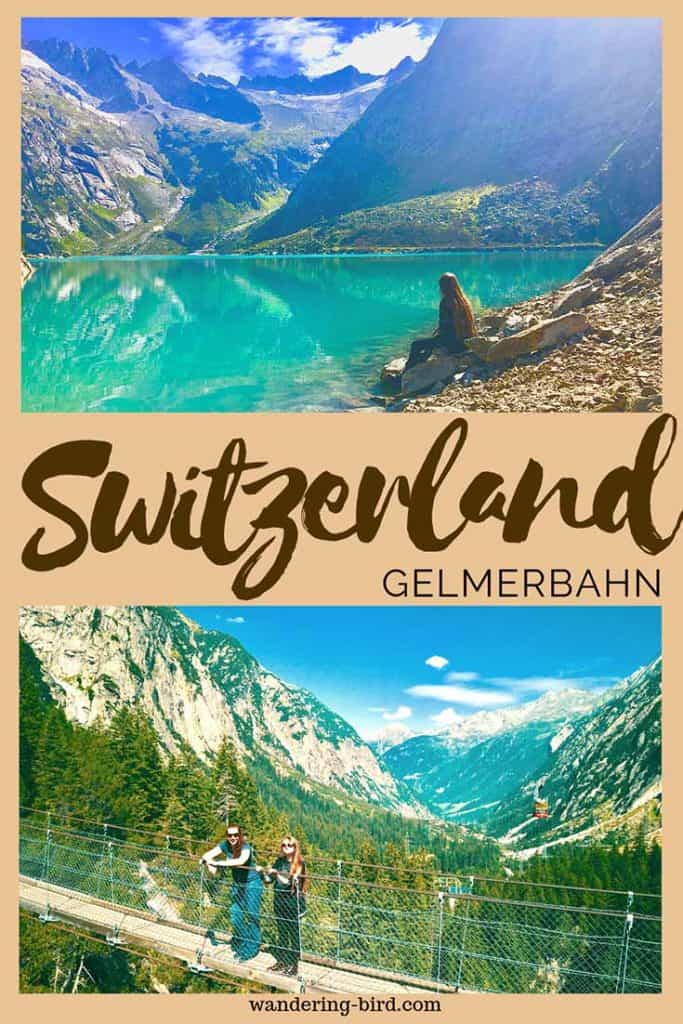 See awesome places we visit, get bonus motorhoming tips and come chat with us on your favourite hangout:
398 shares
error: Content is protected !!