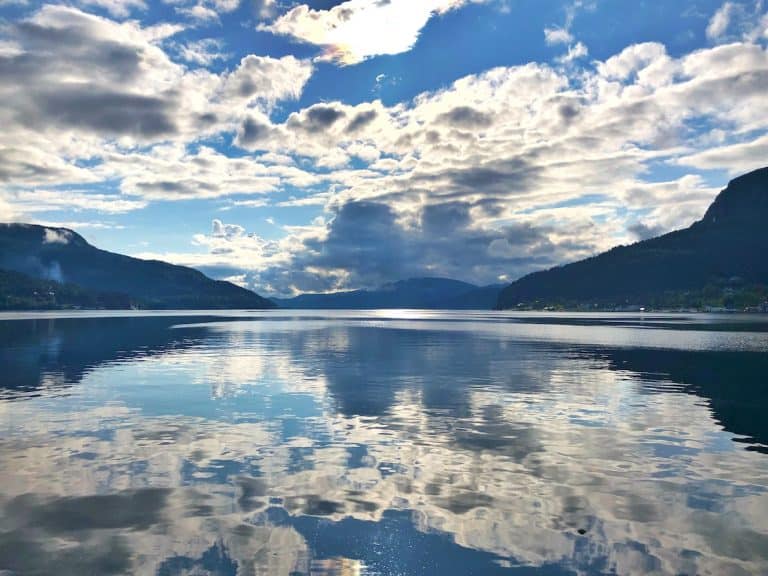 After our drenching near Preikestolen, the rain continued. ALL DAY. And the day after!

It’s startling what a difference to the scenery a rainy day makes. It’s still beautiful, the mountains and the fjords are still breathtaking, but the colours of the water are nowhere near as pretty and the narrow roads get harder to drive when it’s lashing with rain. Having said that, we decided to utilise the weather to have a driving day and get further north on our motorhome tour of Norway.

We did nearly 200 miles on Day 2, which is a lot, even for us! We followed route 13, which was a very fun road- right on the edges of the fjords, with beautiful views when the clouds allowed, and twisty, turny roads all over the place! We also went into a tunnel which did a helter-skelter loop in the middle- not seen one of those before!!

*We work hard to make this the best motorhome blog and road trip website possible, full of helpful content for you. The website is supported by our readers, so if you buy through links on this site we may earn a commission- at no extra cost to you. All opinions remain our own.

If you find this post useful, you can also treat us to a coffee at the bottom of this page- we promise to enjoy it while creating more useful content like this- we might even indulge in a biscuit (or two!)

Along the way, we took a couple more ferries- £50 for a 10-minute ferry is expensive! Having said that, there aren’t really many other options as these are all islands! So I guess we’ll keep taking the ferries.

Our overnight camping spot on day 2 was a mistake- caused entirely by our greediness for another quiet spot with a stunning view.

As we were driving, we found this place, which was stunning!

The parking area was level, but we decided to move on as it was too close to the road. However… we struggled to find other options. In my mind, I was heading towards Latefossen, with a view to fly the drone up the waterfall when all the tourists had gone home, so we passed over a few places which would have been suitable along the way, assuming we’d find something better. Normally, this isn’t a problem, but it was getting later and later and we kept passing places, intent on getting to the waterfall.

Eventually, we made it to Latefossen, which is actually a double waterfall. As with many places in Norway, it surprised us that you can see it for free from the road and there was very little pomp & ceremony. Having said that, I think we’re getting a bit blaise with waterfalls- we were a little underwhelmed. I don’t think the dreary weather showed it off at its best either.

It was now after 8pm and, unsurprisingly, there was nowhere nearby to park. We eventually found a small layby further down the road, which was far too close to a main road and offered little protection from passing traffic. But by this point it was after 9pm, we’d been driving all day, we were tired, hangry and generally just wanted to stop, so we stopped there and hoped the traffic would quieten overnight.

Trucks, coaches and cars continued racing past at all hours, shaking the van and keeping us awake, even with the stabilising legs down. It was not our best nights stop and one I hope we’ve learnt from.

Day 3 was much better, despite the fact that it was STILL raining. We drove a short way to another waterfall, Langfossen, which was MUCH more impressive. If you’d like to have a look at more waterfalls you can visit in Europe, check out this post about 29 waterfalls in Europe, there’s even a map to help you pinpoint the exact place!

We stopped in the carpark, had breakfast and both promptly fell asleep for another hour! Good job there weren’t parking restrictions during the day for motorhomes!

A nice side effect of our laziness is that when we woke up, the rain had stopped and we were able to get the drone out for a quick flight before it started up again.

We continued our onward drive, heading towards Bergen. On the way, we stopped at a hardware store so Mr WB could buy some bits to fix our amazing yet annoying drop-down bed. The motor just isn’t powerful enough to lift the thing back up again- especially with stuff in the cupboards. Grrrr.

It’s the first time we’d really been shopping in Norway and we’ve always wondered how expensive is Norway to visit and travel in. We’ve bought some water and snacks from garages and it’s definitely more expensive than the UK, but not excessively so. A bottle of water was about £2. Bread, milk, and eggs are all fairly reasonable, although cheese seems very expensive at £5/ pack!

On the way out of the hardware store, we smelt the MOST delicious smell… and followed our noses to the source, which turned out to be Peppes Pizza. No, it’s not traditional Norwegian fare, but my goodness it was good!! Two individual pizzas, two non-alcoholic drinks and a dip came to 240NOK, which is roughly £24 (at today’s rate it’s £22.51) When you consider a pizza in Dominos starts at £8.99, we didn’t think it was that bad at all!! Should you need comfort food in Norway, go to Peppes (sadly, they’re not available in the UK- devastating!!) And for reference, just divide the prices in Norway by 10 to get a rough guide to pounds- you should find it much less frightening then!!

With full bellies, we drove a short way up to Eiklandsosen, which involved yet another ferry. This one caused us some concern as it actually went to a different island first… we thought we’d arrived and then realised it was totally the wrong place! Oops!

We found a gorgeous and FREE camping spot right on the banks of the fjord, near to Bergen. Even better, just as we were approaching, the sun came out- making it a spectacular drive around the edge of the fjord. It really is a breathtaking country in the sunshine. We’re not sure what we’re doing next- so many choices and not enough time! It’s impossible to see everything, so I guess we’ll have to pull out the map and start planning!!

There is no electric, but there is water and waste emptying. You can stay as long as you like- all for free! We stayed here for two nights, although sadly it started raining partway through the first night. Due to the weather, we didn’t make it into the city, but if you are visiting, here’s a list of things to do in Bergen.

– Show me more posts about Norway

Onwards- to the Steinsadalsfossen waterfall – the one you can walk behind!

2 thoughts on “Weather and Waterfalls in Norway”

See awesome places we visit, get bonus motorhoming tips and come chat with us on your favourite hangout:
1 shares
error: Content is protected !!