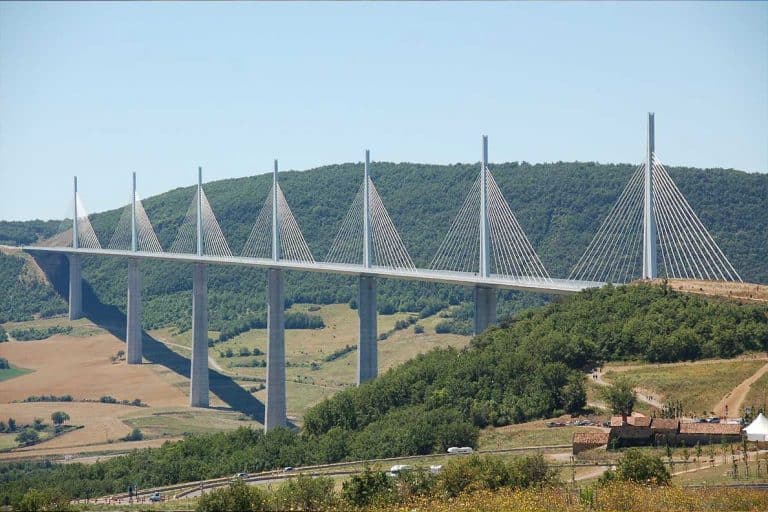 We were heading to Southern France on our France road trip and decided to do what we didn’t do last time- cross the Millau Viaduct in a motorhome! (Top tip- you can also cross in a car or on motorbike- so this post will help you too! 🙂 )

Heading to the Millau Bridge

We set off for southern France (maybe Avignon, maybe Menton) late on Friday afternoon, which was later than planned but couldn’t be helped. Happily, rush hour in central France is nowhere near the chaos of Southern England, and we plodded along quite nicely.

We have a new motorbike trailer for this adventure – it’s got a solid base and suspension, which is the ultimate luxury. So far, it’s going very well and apparently doesn’t bounce as much as our old one. Time (and miles!) will tell.

Planning a France road trip? Here’s everything you need

We drove for about 4 hours, with a short stop to let Mac have a sniff and a leg stretch. There was some debate about who’s iPod should be played, so we tossed a coin… (I did it, as Mr WB was driving… and I still lost! Can someone teach me how to flip a coin so I win??!!) 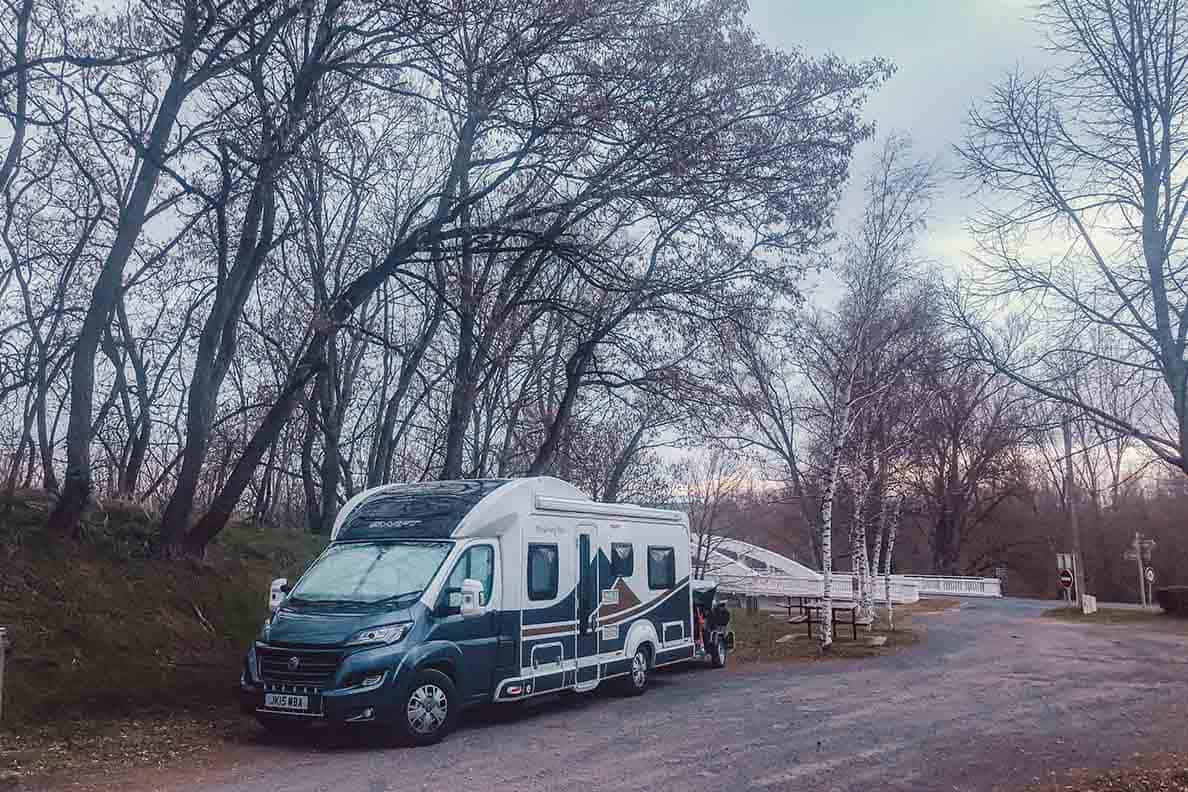 We had no destination in mind for an overnight stop, so as darkness pulled in, I started looking for a suitable spot and found one about an hour north of the viaduct.

Want to learn how to find overnight stops as you travel?

The instructions were supposed to take you down a small slope and park under a bridge, but night had truly fallen when we arrived, so we missed the turning completely. Happily, there was a picnic area just the other side of the bridge and we pulled in there for dinner and a well-earned rest. We thought we’d give it an hour before deciding whether or not to stay for the night, but it was practically deserted, with only one car passing us and no pedestrians.

We spent a pleasant night. Mac is not happy being in his travel crate overnight, so started scratching loudly at about 4am. Does anyone else have a husband who sleeps through everything? It always seems to be me who wakes up and has to deal with the problem! 🙂

I decided sleep was more important than training, so I let him on the bed with us- that will probably prove to be a mistake in days to come! Annoyingly, I didn’t sleep particularly well after that as I was so worried about him falling off the side of the bed! 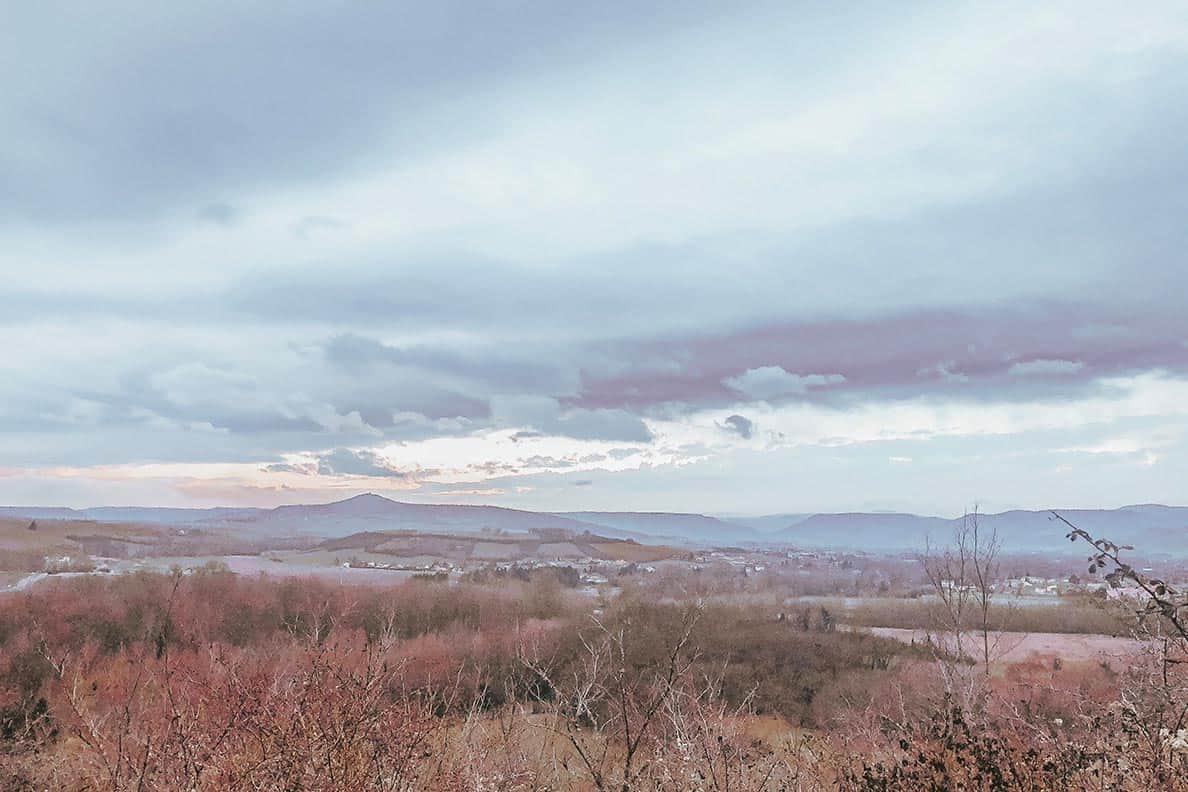 I slowly noticed it getting lighter, so Mac and I went for a walk at sunrise. There was a huge hill next to us which had been hidden by the darkness, so we (I!) decided to climb that to watch the sun come up. It seemed like a good idea until about halfway up, where both puppy and I decided to just stop and enjoy the view from there! 🙂

After a decent breakfast of bacon and egg sandwiches, we headed off for Millau!

Some facts about the Viaduc de Millau

The Millau bridge is on the A75, which is technically a motorway, but be careful if passing that way in winter- the road is high and can get blocked by snowfalls. Also, try and avoid the area in July and August if at all possible- the queues are horrendous!

Crossing the Millau Viaduct in a Motorhome

I wasn’t entirely sure what to expect from the World’s Tallest Bridge, but it blew my tiny mind anyway. The thing is HUGE! It cost us 12.90€ to cross in a motorhome (I believe it’s more expensive in July & August!) and our tollpass worked fine.

Sadly, the weather wasn’t amazing- drizzle and low cloud, but there was enough of a view to see down the valley and the winds weren’t strong enough to close the bridge, which was good!

Best views of the Millau Viaduct

After crossing over, we decided to go on a detour and get some photos of the viaduct, as you can’t get very good photos whilst you’re driving over it. I randomly picked a road which went under the bridge and we headed that way. We then found an even smaller road- this one was definitely not intended for motorhomes, but we headed down it anyway, hoping that we wouldn’t meet anyone coming the other way (we didn’t!)

The road opened up and we found a lovely parking spot for lunch, with great views of the bridge. It really is an incredible piece of engineering!

Happily fed and watered (not sure I’ll ever get tired of crusty bread and cheese!), we resumed course for Menton. As we were driving, I realised something slightly worrying- there are very very few camping spots along that coastline. We were looking for a campsite or an aire, as we wanted to ride on the motorbikes if weather permitted, but it seemed as if most of the campsites hadn’t opened yet (early March). This was an unpleasant surprise, and one of the downsides to not planning/ booking things in advance.

Still, there is always a solution. We found an open campsite just over the border in Italy, about 15 minutes from Menton, but it was full. The owner did offer to try to ‘squeeze us in’… until we explain we were 7.5m with a 3m trailer. “Oh.” was the reply!

Still, we kept searching and, eventually, we picked one just north of Nice- Camping Magali.

This was a rustic French campsite, with crazy electrics (not sure how safe they were!) and toilets I will never use… (you can see them in the video!) But it was a safe enough base for a couple of days for us to leave the motorhome while we explored on the bikes. We set up a long lead for Mac in the sunshine and unloaded the bikes from the trailer, giving them a good clean afterwards.

Our new trailer is going well, although one of the straps at the back keeps coming loose and my gear lever hit the wheel arch at some point; we need to play with the straps to get them right. But it survived being pulled down a tiny road and even had to reverse… all without a problem. Bikes aren’t staying much cleaner though- we decided to try without covers but we might need to add them back on again!

Quick dinner of French sausages and salad and we’re all ready for a good night sleep before our big adventure with lemons tomorrow!

Want to watch the video of us crossing the Millau Viaduct in a Motorhome? (And see around the campsite?)

We also share tips for taking your motorhome to France, dealing with the Gilet Jaune and other useful info. Just click below to watch.

Have you ever crossed the Millau viaduct, in a motorhome, car, bike or anything else? Did you have better weather than us? We’d love to hear your story. 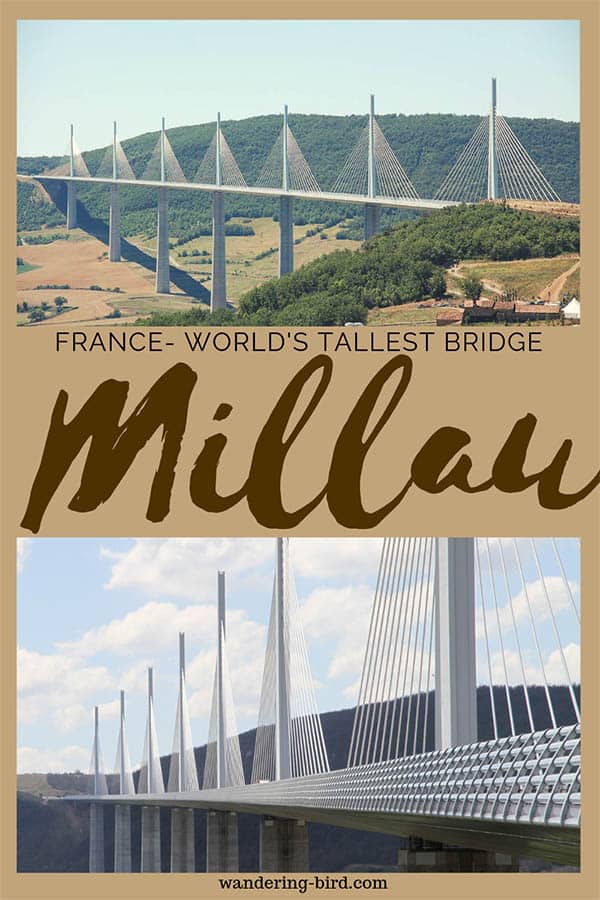 5 thoughts on “Crossing the Millau Viaduct in a Motorhome”

See awesome places we visit, get bonus motorhoming tips and come chat with us on your favourite hangout:
101 shares
error: Content is protected !!