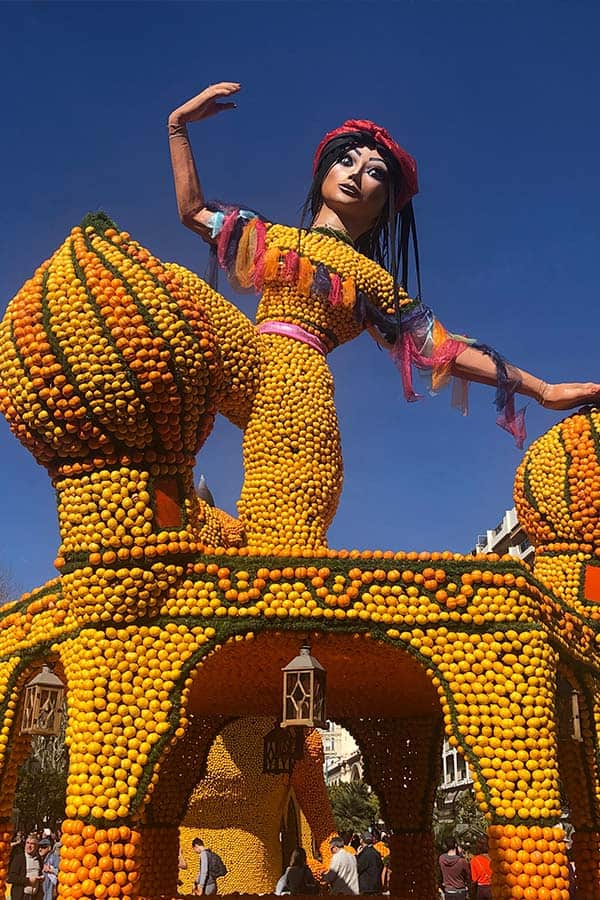 On Sunday morning, we headed off to the Menton Lemon Festival as part of our France road trip itinerary. If you’re not sure what this is- it’s a display and parade of ENORMOUS floats and designs… all made of lemons (and other citrus fruit!)

Seriously. I’ll be honest, we weren’t sure what to expect!

It was the last day of the Lemon Festival and I was quite excited, although traffic was horrendous. The autoroute there was fine, but as soon as you exited at the Menton exit, you joined a slow-moving, long queue for several miles.

Menton is on the south-east corner of France, about 10 miles from the Italian border, right on the coast. It’s a beautiful part of the world- definitely worth a road trip. Menton is also only an hour from Nice, so you can easily visit for the day. There’s also a festival in Nice at the same time- check out the timetables so you can catch both.

Parking at the Menton Lemon Festival

Luckily we were on the bikes, so we decided to park up and walk the mile or so into Menton. It was quite easy to find motorbike parking, but I think cars would be much harder as you are directed into designated car parks. Motorhomes are apparently parked in a carpark on the seafront, but only on Sundays!? I’m really not sure why or what happens on the other days!

There are different events happening throughout the week, including night-time light displays, fireworks and parades. Sundays are the big parade days and a lot of the roads are closed to accommodate the procession (which might be why the traffic was so bad!)

Before you can queue to enter, you had to queue to get tickets, which took about 15 minutes. Tickets cost 12€ just to enter the garden (which is what I did). The displays in the garden are static and are NOT the same ones used in the display- I was worried the garden would close at 2pm when the parade started, but it didn’t. You can buy extra tickets for parades, seating, night displays etc- it’s all on the website HERE

Taking a dog to the Menton Lemon Festival

You are not allowed to take dogs into the garden or even for them to be on the parade apparently. There are too many people and the organisers don’t want dogs fouling in the garden, which I completely understand.

We didn’t want to leave Mac in the motorhome all day, so Mr WB volunteered to sit in a cafe whilst I visited the festival, then he could go in afterwards if he wanted to.

I really don’t know what I expected, but I naively hadn’t expected SO.MANY.PEOPLE. Oh my goodness, it was crazy! Once we had the tickets, we had to join the queue for the actual entrance. I think we were queuing for about an hour- it was very slow moving as they checked everyone’s bags and patted people down. Not sure they appreciated my biker girl kevlar!

We were also stopped many times by people telling us we couldn’t take a dog into the festival… I really need to learn the French for “it’s ok; they’re just waiting with me!”

Inside the Menton Lemon Festival

Once inside, it was just a mass of people. I managed to get close to the displays (there were 10 in total- the designs change every year) by standing my ground- luckily I’m tall! People were trying to push you out of the way and walking in front of you whilst you tried to take photos. There was a huge mix of nationalities, including a surprising number of Chinese/ Asian.

The displays were impressive- I cannot comprehend how long they must take to build! All the lemons and oranges looked fresh too- even though this was the last day! I have no idea how they managed to do that.

Fun Fact- did you know when you plant a lemon tree that you can’t tell if it’s going to be a lemon or an orange tree until the fruit grows!

Food and Drink inside the Fete du Citroen

There were lots of stalls inside the garden and lots of vendors shouting their wares. You could buy lemon trees (I was so tempted, but we were on motorbikes!), lemon juice and limoncello, lemon soap, postcards, photos and many other mementoes. There were also some food/ drinks stands, but as I was on my own I tried to be as quick as possible.

Watch our video of the Menton Lemon Festival

You can see the queues, the incredible designs and the sheer number of people trying to see them! (You can also see our trip to Monaco and where Mac and I were chased by a big scary dog…!)

Menton Lemon Festival- worth a visit?

My lasting impression is awe at the designs, but overwhelm at the people. I’ll be honest, I started to feel a bit claustrophobic after a while, which wasn’t much fun. We were incredibly lucky with the weather- it was about 19 degrees. In March! I think on a rainy day it would be less crowded, but you’d get wet! If you happen to be heading that way at the end of February, then it’s worth a stop off, but I’m not sure I’d recommend a road trip specifically to see the festival- I guess it depends how much you like lemons! 😉

Menton itself looks like a really pretty town- we’d like to come back and see it better. Much of it is closed off during the festival, so we’ll have to revisit at a different time of year to explore it properly. We’d also like more time to explore the rest of the French coastline, including Nice, which has lots of cheap and free things to do– surprising for the French Riviera and is one of the top cities in France!

Have you ever visited the Menton Lemon Festival? Would you like to? Let me know below. 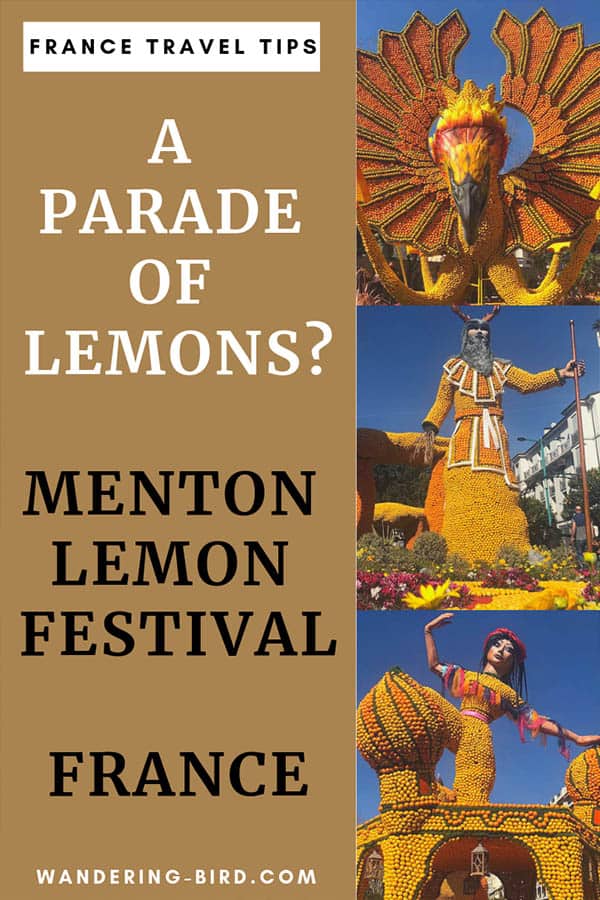 See awesome places we visit, get bonus motorhoming tips and come chat with us on your favourite hangout:
74 shares
error: Content is protected !!