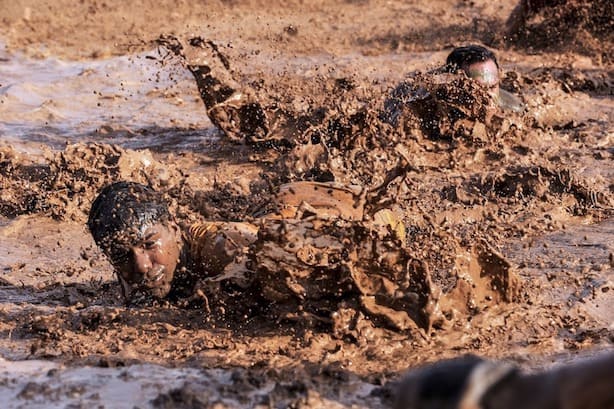 Planning a trip to Europe? Knowing what European traditions and customs you might find is important- but these bizarre events might just be the reason you choose to visit somewhere in the first place!

Europe is weird. Don’t get me wrong, exploring new countries and cultures is one of my favourite things about travel, but there are some things we’ve come across which have made absolutely no sense whatsoever.

And no, this isn’t a “Europe vs UK” thing- we have just as many odd things happening in the UK- as you’ll discover below!

Still, if you’re planning a Europe trip, it’s good to know what you might find- so here are some of the weirdest European traditions and customs we’ve found. If you know of any more, by all means let us know about them in the comments!

*We work hard to make this the best motorhome blog and road trip website possible, full of helpful content for you. The website is supported by our readers, so if you buy through links on this site we may earn a commission- at no extra cost to you. All opinions remain our own.

If you find this post useful, you can also treat us to a coffee at the bottom of this page- we promise to enjoy it while creating more useful content like this- we might even indulge in a biscuit (or two!)

There are different rules and traditions in every culture- and you’ll be much less likely to cause offence if you know what they are in advance. But there’s nothing quite like religion to bring out some of the strangest customs.

For example, did you know that most of Germany bans dancing, in any form, on Good Friday (and many rural places ban it on Sundays)? Or that in Romania they whip women with willow branches on Easter Monday to promote fertility?

In Catalonia, Spain, they have El Caganer– a Christmas tradition involving miniature models of people… umm… defecating in the Nativity scene. And be careful if you ever visit Corfu at Easter. Every Easter Saturday, at 11am precisely, the locals start throwing pottery out of their windows to smash onto the street below. It apparently stems from a New Year’s Eve tradition of clearing the house for the New Year. (TOP INSIDER TIP- fill the pottery with water first for an extra big ‘smash’!

And in some parts of Scotland they still ‘blacken the bride‘ by pouring disgusting and horrible things over the happy couple to ensure they can withstand humiliations together. Fun, huh?!? (If you’re planning a wedding and a Scotland Road trip, be sure you plan it well!!)

There are plenty of events and bizarre traditions in Europe (and probably worldwide) which involve food. Here are a couple of the strangest…

Every year in the UK, on the last Bank Holiday Monday in May, a place called Cooper’s Hill in Gloucestershire becomes… utter chaos.

For over 200 years, people have been racing down a ridiculously steep hill… chasing a cheese.

Yep, an actual cheese. The cheese is produced specially by a local cheese maker and is let loose in front of the competitors and they race/ tumble down the hill trying to catch it… You know what- just watch the video below. It’s impossible to explain this craziness.

And this is DANGEROUS. People break limbs every single year. There are literally people at the bottom of the hill to stop the competitors from rolling further.

You can just turn up on a day and enter… if you dare!

Oh yes- Spain knows how to food fight. Every year, Buñol, near Valencia, hosts a tomato throwing festival. Yep, people literally pay to throw tomatoes at each other. If you’re motorhoming in Spain, make sure you park far far far away.

Over 160 tonnes of tomatoes get thrown by 22,000 participants in a massive food fight all over the city- it gets very, very messy! The event began in 1945 as a dispute between 2 farmers… and has now grown to crazy levels!

The one-hour event takes place at the end of August and is for over 18s only. If you want to buy tickets, their website is here. And yes, here’s another video for you to enjoy…

See awesome places we visit, get bonus motorhoming tips and come chat with us on your favourite hangout:
27 shares
error: Content is protected !!